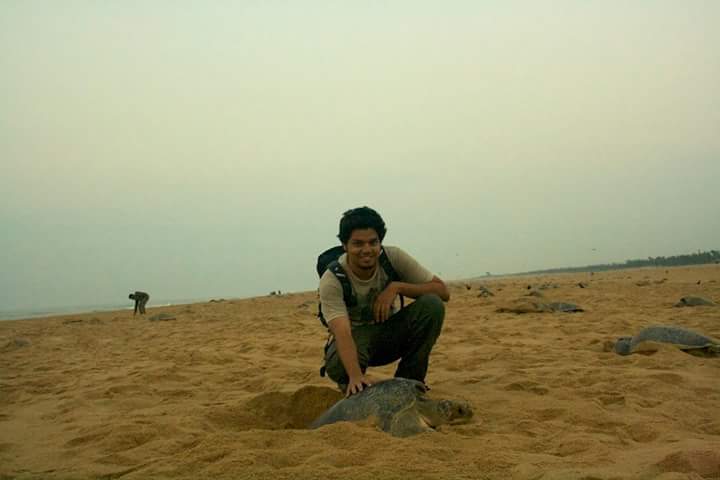 One shell is not enough: turtle researcher Chetan Rao on the disastrous effects of an oil spill on turtles.

Terrible things happened last month. More or less December has been a month of barbarism; terrorism attacks and ecological disasters.

On 9th December 2014, a tanker, Southern Star7 carrying 92 gallons of bunker oil capsized after a collision with another vessel inside the Sunderbans in Bangladesh. The result is a large tract of the estuary cloaked in a black viscous layer. This could well be warranted as South Asia’s black plague. . Almost 90% of the oil has been spilled on the mangrove estuaries meandering its way into the fragile intertidal ecosystem.  This is the worst news. And I will tell you why.

Mangroves are formed at the delicate boundary where the fresh water from the deltas empty into the sea. The result is a nutrient rich soil that acts as a nursery grounds for inter tidal species such as crustaceans, planktons and fish which act as prey base for larger threatened species such as the saltwater crocodiles, tigers, river dolphins and reef sharks. Not to forget that the Sunderbans is one of the few places where Bengal tigers occur in large numbers. This rich ecological treasure trove is now going to be covered in a thick dark slime of oil and oil is bad.

The Sunderbans also host breeding grounds for a whole range of freshwater turtle species and also provide breeding beaches for sea turtles such as the Hawksbill, Green and the widespread Olive Ridley Sea turtles. These last remaining beaches harbor the interesting Bay of Bengal population of Ridleys. The genetic studies of these Ridley populations suggest that these have been ancestral populations of Olive Ridleys worldwide.

Ridleys nest extensively all along the Indian subcontinent and two sites in the state of Odisha in Eastern India are well known mass nesting sites! Olive Ridleys are known to exhibit synchronizing nesting where they arrive on the nesting beaches in large numbers. This phenomenon is known as “arribada” meaning arrival in Spanish. Prior to nesting, large scale congregations take place along the coastlines. These aggregations are susceptible to any sort of disturbance either natural or manmade will have significant impact on nesting numbers. Oil spills leave turtles stranded and create massive health problems such has lacerations, starvations and internal organ failure. Oil affects hatchlings too. One in ten hatchlings survives to adulthood. These hatchlings seek the support of sargassum weeds which act as a nursery for these neonates. Due to oil spills the seaweeds wither, leaving these neonates without any cover in the open water.

Some of the most known threatened freshwater turtles are known to occur in the Sunderbans such as the Sunderbans Batagur, narrow-headed softshell turtle, Leith’s softshell turtle and the crowned river turtle (Source: TSA). These species only occur in the Gangetic and the Brahmaputra deltas. Like their marine cousins, these turtles suffer similar fatalities due to the toxic nature of the oil. Such drastic fluctuations in source populations of these turtles can cause stochastic changes in global populations of these chelonians.

Human carelessness has grown over the years, and has grown toxic. Turtles only have a shell to protect them, which is helpless against our careless crusade. Let’s not forget this.

Chetan Rao is a post graduate in wildlife science from the Wildlife Institute of India with a penchant for reptiles. His research interests are in reptile ecology and evolutionary biology.