On Saturday night, a young tiger was killed on a road near Dehradun.

You may think: are there tigers in Dehradun? Where was the tiger going? What were we doing on Saturday night – were we on a road, heading to a party, or on a leafy residential lane, propelling ourselves to a quiet, music-suffused evening at home?

For the more imaginative among us, we could remember tales of animals and beasts that crossed roads in our parent’s time, or the joke about the chicken crossing a road. For others, it may seem odd; after all, how many countries in the world can say a tiger was crossing the road?

There are many aspects that are amazing and diverse about our country. Those who use roads – or hate using them, is one of them.

There are many among us who think that a set of gleaming, black-topped roads, winding for miles, visible from a plane, is a sure sign that the nation is on the right track, the path to prosperity – literally.

And yet there are others for whom roads, built for cars – are not such good news. I have met tribal people who prefer cutting through forests than taking a road or a bus trip, because the walk through the forests, leeches et al, is shorter than traversing a dusty, noisy, pushy road.

The National Highway from Delhi, just before Agra, cuts a town in half, with a tall iron fence dividing the area into two. What do people do to cross the road? They run for their lives. Sometimes, they clamber over the forbidding fence in the mid-day northern heat. Sometimes they walk half a kilometre to find a crossing, broken apart forcibly, or at a red-light meant for cars.

Also read – Tiger is not the only animal that needs saving

In north Delhi’s Yamuna bypass, I often see women hitching up their sarees, sprinting wild-eyed across the road, denied dignity or safety. In Kolkata’s tragic flyover collapse this April which left 24 people dead, one of the most obvious lacuna in the much-delayed project was that the flyover was being made in an old, crumbling part of the city.

There was neither the passage nor the engineering rationale to build this gigantic structure, which was within arm’s length from century-old buildings. The purpose of this flyover, like many other roads, was to serve the car-using, motorised public, to the peril of all that was around this road.

Now coming to wildlife. Wild animals do sometimes use roads. To be more specific, they are forced to use roads, as roads without speed breakers cut through national parks, tiger reserves, reserve forest, and eco-sensitive areas.

As in the case of Kolkata, the roads are built, widened and maintained oblivious to the ecosystem, human or animal, around it. On the Haridwar-Najibabad road, where the tiger was killed on May 8, three leopards also died earlier, after being hit by vehicles.

Also read – When wild elephants go on rampage and viral

A Facebook community “Roads to Nowhere” catalogues deaths of various animals on roads across the country. The species and individual animals may surprise you. The documentation of death includes tigers and leopards, known to be sure-footed and otherwise fearsome. Like all cats, indeed, like the metaphoric “deer in the headlights”, tigers freeze when light falls on them. The death toll also includes elephants, who move surely, slowly, and for long migrations, but are unable to escape a speeding truck or car. It includes birds, usually known to fly rather than walk – struck while flying low, or doing takeoff.

It includes endemic animals like the Western Ghat’s lion-tailed macaque, which spends its life on trees, occasionally coming on the road to cross over to another forest. It includes tiny butterflies which seek salt from roads, incredulously unaware of a huge vehicle charging forward. It includes ectothermic snakes and amphibians, who come on roads seeking life-giving warmth. Basically, the death toll includes all sorts of wild animals.

Also read – India is not a Republic for all species

As more roads come up on our maps and under our cars, and as forests and wild areas shrink, the deaths will only increase. Are we to continue turning a blind eye to what roads do to those who are not using motorised vehicles? 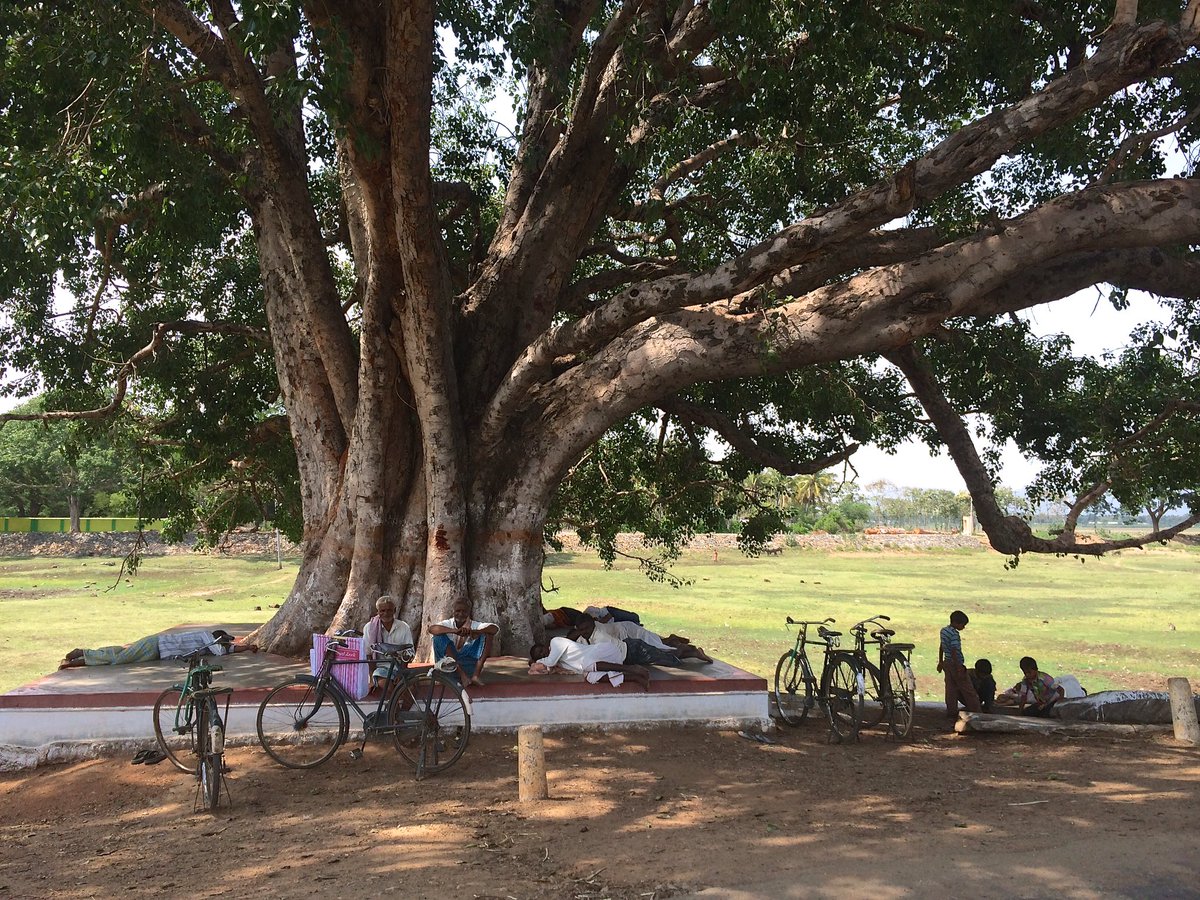 Nearly every *katte* in south India is built under a ficus. Birds & squirrels confer above, people confer below.

To stress the point, roads are used by many, and they mean different things for different people – or animals. For a cyclist, a road can be a death trap, if it has no speed breakers and motorised vehicles zip down. For a child, a road can mean looking at the patterns it forms on the ground – a mosaic of cobbles and gravel in one part, a pugdundee in another. 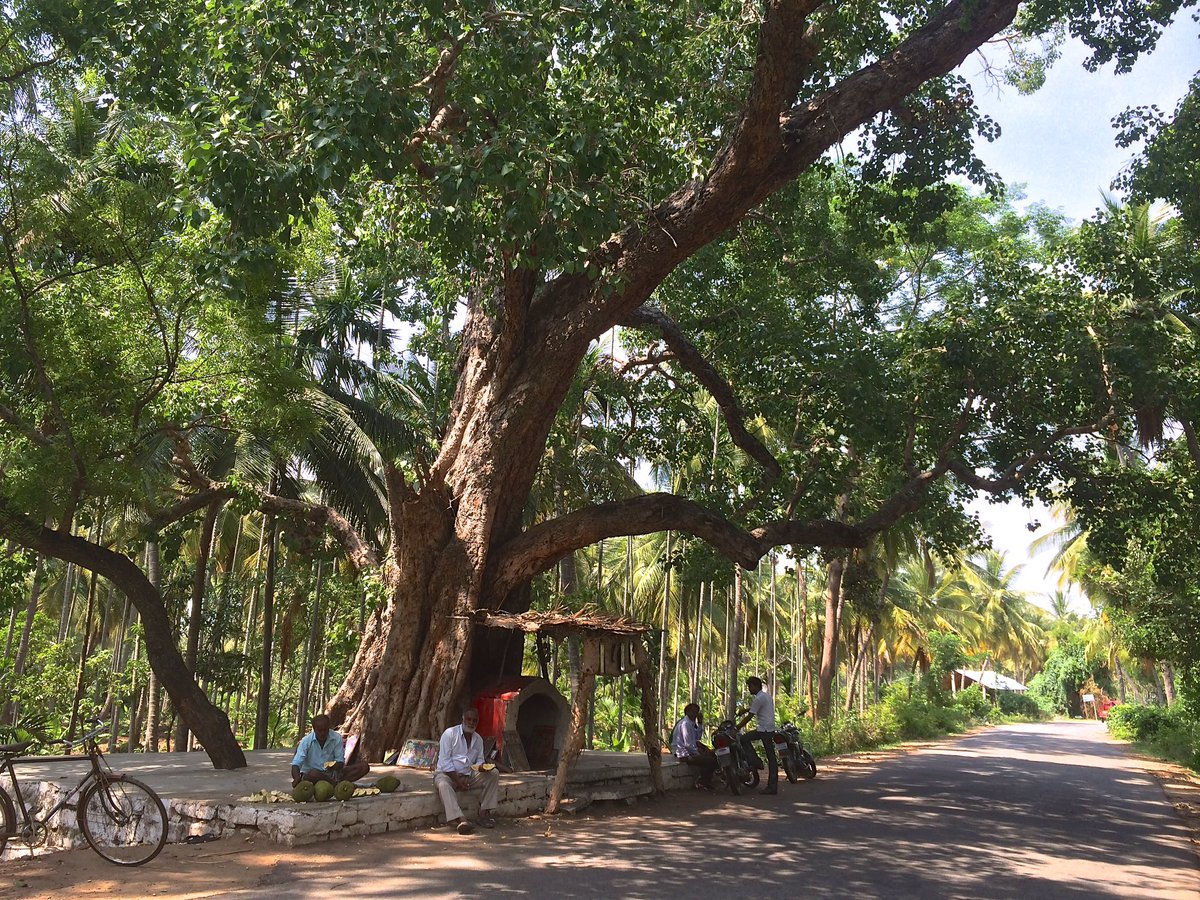 We could have highways that connect not just cities but citizens. It is a choice we can make, like everything else.

For villagers living close to natural ecosystems, markers and milestones are usually a fruiting tree, a holy Banyan, or a big rock. For many, roads are what is around the road rather than on it: a meeting place, a tea-stall, a place to sit.

Roads take us to places. Roads are memories. A road, a lane, a path, a walkway, is an essential part of man’s existence. Roads join people; they also displace them, as in the case with the Mumbai-Delhi Industrial Corridor. Roads take us to tiger reserves, and they also kill tigers. All over the country, roads are being thoughtlessly widened, slashing down acres of forests, thousands of trees, homes and refuge for birds, animals, and shade for people who use these areas.

Also read – Why does nobody talk about intolerance towards wild animals?

Like every Indian, I want India to have good roads. No one should live in poverty and deprivation because there is no road to his home or to a hospital. But roads have to be built according to what is around them. They can’t just be planned in conference rooms and executed in isolation.

We must decide, for instance, to have roads with speed breakers in protected areas and sanctuaries. Here, the purpose is wildlife conservation; speed has to be regulated. In our ever-growing country, these reserves are minority land use; they seem invisible while decisions are being taken.

We must decide how many lanes we need in these areas- are two lanes not enough, going through forests? Do we need six? As car traffic goes up, as it inevitably will, shall we require sixteen lanes one day? We love the Fast and Furious, and every car ad shows a racing car. But what of the slow and guileless; that non-motorised vehicle, that troop of walking villagers, that elephant herd, that once-fearsome tiger?

The time has come to stop our obsession with cars, and build roads that don’t just encourage speed and width, but also suitability.

The road to prosperity is a long one. But prosperity also needs thoughtfulness. We don’t need more dead tigers and imperilled pedestrians to show us that roads need to adapt to those who are forced to use them; not just those who choose to use them.

This first appeared in the DailyO.