The Nyamjang Chhu dam will inundate Zemithang valley, the winter home of the Black-necked Crane that’s sacred to Buddhists. Can development override nature and faith?

This month, an Australian court declined environmental clearance to industrial group >Adani for coal mining in Queensland, Australia. The reasons for this have been made clear by the court: the proposed project is likely to harm a skink and a snake species found in the area.

That a skink, a shy, skittering reptile, could stop a mega project may appear unbelievable to many people, particularly those who believe in rapid industrial growth. But the court has, in fact, squarely put out a message that a country needs to take care of its species. More than morphology, glamour or specification, the emphasis is on the very existence of the species.

Found only in China, Bhutan and India, one of the crane’s few global wintering sites is in Arunachal Pradesh, and it has chosen two places here for its winter migration: Sangti and Zemithang Valley. Zemithang, a remote area, nurtured and conserved by the Buddhist community for years, will get submerged by the proposed Nyamjang Chhu dam.

Case against the project

There is an ongoing case in the National Green Tribunal against the project. The legal team that is arguing in favour of the hydroelectric project claims that the numbers of the >black-necked crane are too low to merit stopping the project. On the other side of the argument is not just the existence of the crane at Zemithang, but also the belief in its presence and in its wilful choice of Zemithang as a wintering site.

The case brings to light several dilemmas: one, whether the presence of black-necked cranes and other biodiversity at Zemithang is ‘good enough’ to stop a project. Two, whether projects need to be appraised in the light of spiritual, altruistic and religious concerns. Three, whether the environment impact assessment (EIA), which lead to environmental clearances, need to be re-conducted after these concerns come to light. The EIA has been scrutinised by the local group, ‘Save Mon Region’, and it does not mention the black-necked crane.

The bird is a restricted species, which favours cold, high-altitude spots, overlapping with countries and regions that follow Buddhism. In Buddhist lore and mythology, this elusive but magnificent crane is a companion to the lamas.

In ecology, the crane has been recorded in just three places in India: it breeds only in Ladakh (about a hundred birds), and it has only the two wintering sites in Arunachal Pradesh, which are themselves part of less than 10 global wintering sites.

In court, the lawyers for the project team argue that the crane “perhaps” visited the site “years ago” but that this is an insignificant point to stop the project. Meanwhile, the Buddhist community that lives in and around Zemithang as well as organisations such as WWF-India have photographic evidence of the crane’s visits. Only about 5-7 birds visit Arunachal Pradesh each year, and their visits are eagerly awaited by local communities.

“Apart from the black-necked crane, the area also has other endemic bird species, such as the Satyr tragopan, the Mishmi wren-babbler and the Beautiful nut-hatch ”

In a sense, then, the case of the dam site in Arunachal Pradesh is similar to that of the Carmichael mine. The Yakka skink, the conservation of which the Australian court upheld, is a restricted-range species, found only in Queensland. Like the black-necked crane, the species is still visible, but only due to the conservation of a few and spatially small sites.

EIAs, a precursor to environmental clearances, are meant to give details of flora and fauna at the site of the proposed project, as well as the impact on that flora and fauna by the project in question. In the case of the Nyamjang Chhu dam, which proposes to generate 780 MW of power, the primary impacts will be the submergence of the crane’s habitat in a biodiversity hotspot. This is not acknowledged in the EIA. 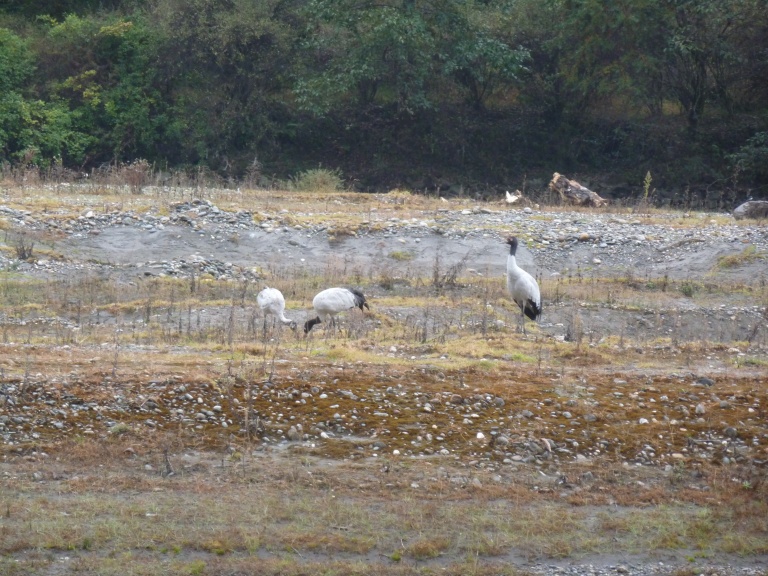 In the late 1980’s, a tiny group of Siberian Cranes still visited India, in a small dot of a sanctuary, Keoladeo in Rajashan, which spreads over a modest 29 square kilometres. Amongst very many other wetland habitats India had to offer, the Siberian Cranes chose Keoladeo to repeatedly winter in each year. Scientists can only guess why birds, especially rare birds, choose certain areas over others. The right ecology, absence of human disturbance, places to both feedas well as and hide in, are all determinants. Like people choosing a certain colony or favourite watering-hole, territorial and choosy cranes select certain spots they return to year after year. For India, the Siberian Cranes were both a tourist attraction, as well as an enigma. Through mysterious migratory clockwork, a clock run by nature, they came around the same time each year, and India could call itself part of the Siberian Crane’s range. In the early 2000’s, the Siberian Cranes stopped coming, and have not returned since. The memories of the birds, and the hope that they will return, have however not abated.

The spirituality associated with the black-necked crane is not just because of its impressive beauty and its call, but also because of its very elusiveness and the anticipation built around its appearance, ideas that seem to be a metaphor for the wonders of nature.

A monk living in Arunachal’s Tawang Valley told me that it was not the number of cranes visiting Arunachal that was important, but the very fact that they came to the State. If Arunachal Pradesh and Ladakh had not been inaccessible, high-altitude areas, many more people would see the bird and hear of its associated mythology, he said.

Which leads us to the final question: how does belief and faith inform our planning and development decisions? For Buddhists, the black-necked crane visiting their remote, snowy home is living proof of their belief and faith. For conservationists, birds that traverse long migratory distances to transform landscapes in winter are part of a more secular belief system, one that valorises Nature and its surprises.

Whether a major dam gets built on Nyamjang Chhu river is not the only question. The question is also whether such a project can go ahead without taking into account certain complex realities.

EIAs that conceal facts should not be the only bulwark for deciding what to do with our landscapes. And, finally, questions of faith certainly should not be just a numbers game. The numbers of black-necked cranes in Arunachal Pradesh might be small, but faith has never relied on numbers.

This first appeared in The Hindu.