It’s hard to love something when you know it will be taken away from you.

And then, imagine loving something that is brighter, more incandescently beautiful, more lush with colour, more laden with mythology than anything else around it. A woman with three eyes, a woman with anger, a woman with a smile.

Durga Puja comes every year, carrying with it a cornucopia of feelings. And upon its arrival, a flattened maidan, or colony park, or a parking lot wedged between buildings, or the space next to a mother dairy, or an abandoned cricket field, or a pedestrian street corner, becomes the stage for the visual and the spiritual. Tents come up, flowers are flung about, shapes are carved out of thermocol and white shola wood. Somehow a stage is erected even as wires crisscross busily – all for the reign of the angry-but-smiling goddess.

Durga is made most often of clay or terracotta, elemental in the simplicity of being created from the earth. The dense brocade saree, the glittering weapons, the flaming sindoor, the delicate jewellery, the luscious curls, and crinkling crowns are all but embellishments for the basic, graceful, swaying clay shape. As suddenly as she comes, transforming the dull maidan into a hurricane of activities and a whipping of feelings and a promise of togetherness, she is gone. Durga is immersed in flowing rivers, which then meet the sea.(Photo: India Today)

Each year, those who worship fall into glum sadness as the Puja comes to an end. As artist The Bong Sense describes, it’s the “aar bhalo lagche na” syndrome (nothing seems appealing anymore). The air no longer has the glint of new jewellery and clothes, songs have been silenced, the last kebab served, stoves been hushed.

Her leaving is sobering. The frenzied days of the Puja are so overwhelming, and the leaving seems to be a bodily blow to the solar plexus – a reality that cannot be faced, a sudden denial of oxygen for people who have run 400-metre races, inwardly and outwardly, for five days flat. This year, I thought about where the body of clay goes.

This year, I thought about where the body of clay goes.

The answer is strikingly simple.

Durga is immersed in flowing rivers, which then meet the sea. That is the same journey for ashes of deceased people as per Hindu custom. How do we explain her journey to our children and those who do not know? Does Durga end up in the Gangetic delta, whose air whispers with stories of Bengal, the silt of the hopes and struggles of the Northern Plains in her long curls? Does the river deposit her gently into a side wetland, creating an unexpected embankment or flurry of aquatic activity? Durga is made most often of clay or terracotta, elemental in the simplicity of being created from the earth. (Photo: PTI)

I can tell you what happens when she is immersed in the Yamuna in Delhi.

What happens is nothing. The Yamuna does not have enough water, even post-monsoon, to carry a goddess to the sea. The immersion is an embedding, not a letting go.

The letting go of the goddess, amidst petulant, hopeful chants of “aasche bocchor abar hobe” (she will come again) is clustered around the idea of a leaving, a Great Separation. It is about the fluvial quality of the river, a river that flows, a river that carries things to you, and equally, also takes things away.

Like a heartbeat, constantly in motion, still and regular, an artery. The fact that most of our Gods are supposed to depart through the conduit of flowing rivers is laced with irony. Our rivers are in no shape to carry faith. The new National Waterways Act is dredging the Ganga and various other rivers, changing topographies mechanically with no understanding of natural formations or geo-hydrologies. 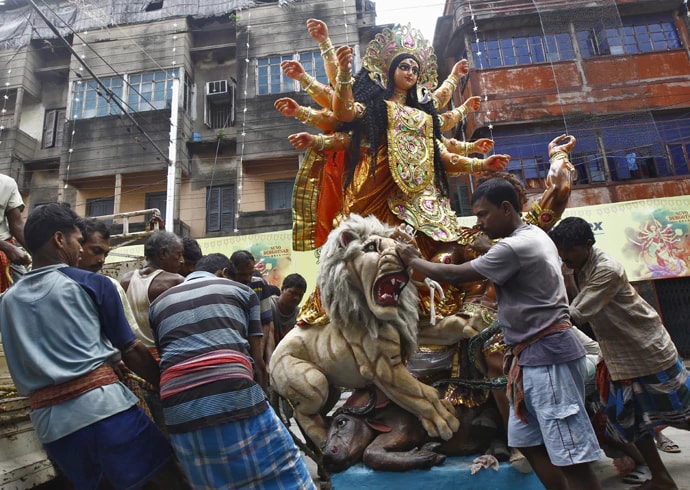 Each year, those who worship fall into glum sadness as the Puja comes to an end. (Photo: Facebook)

Underwater pool formations, loved by dolphins, are being ruined; sandbanks and river beds where wild species nest are being destroyed. Migratory Hilsa fish stopped spawning in the Ganga after the Farakkabarrage cut off their movement. The inter-linking projects for various rivers takes an engineering, not ecological or fluvial, view of rivers. Rivers are not seen as arteries, but as bodies of water, bodies to be turned around, stopped, tied, and exploited.

The inter-linking projects for various rivers takes an engineering, not ecological or fluvial, view of rivers.

I can no longer think of Durga without thinking about where she goes. Her leaving now seems more of a putrid, coagulating watery grave than a vivid ride towards the day of Vijayadashami (the victory of good over evil).

After Vijayadashami each year, there is a year-long wait for the Durga Puja festival, loved by many for its inclusion, its cultural extravaganzas and its broadening of scope beyond a solely Bengali identity. But this wait should not be made without casting our thoughts towards our rivers. Our rivers are in no shape to carry faith. (Photo: PTI)

One solution is to stop immersing the goddess in rivers. The other, more comprehensive one, would be to ask for a river that flows. Ask your MP. Ask for this being an election issue. Ask for public consultations before riverine projects are hammered into acceptance in minutes of meetings.

Faith does not believe always in what it can see. Yet, what I can see is the sad sight of a river not being able to carry a clay and bamboo weight; I see multi-crore projects doing everything to stop minimum ecological flows. There is money to be made from “development” and “engineering” projects. But what of the idea of a river with agency? An actual motion, a flow that carries dreams, faith, hydrologies, sediment, bespoke prayers and the lives of millions of wild souls?

But what of the idea of a river with agency? An actual motion, a flow that carries dreams, faith, hydrologies, sediment, bespoke prayers and the lives of millions of wild souls?

That flow today is like a love that is being petered away, lost bit by bit to digging machines and disenchanted careless plans. That flow in our major rivers is the first love that we may lose, even before we know it.

This first appeared in my column for DailyO.