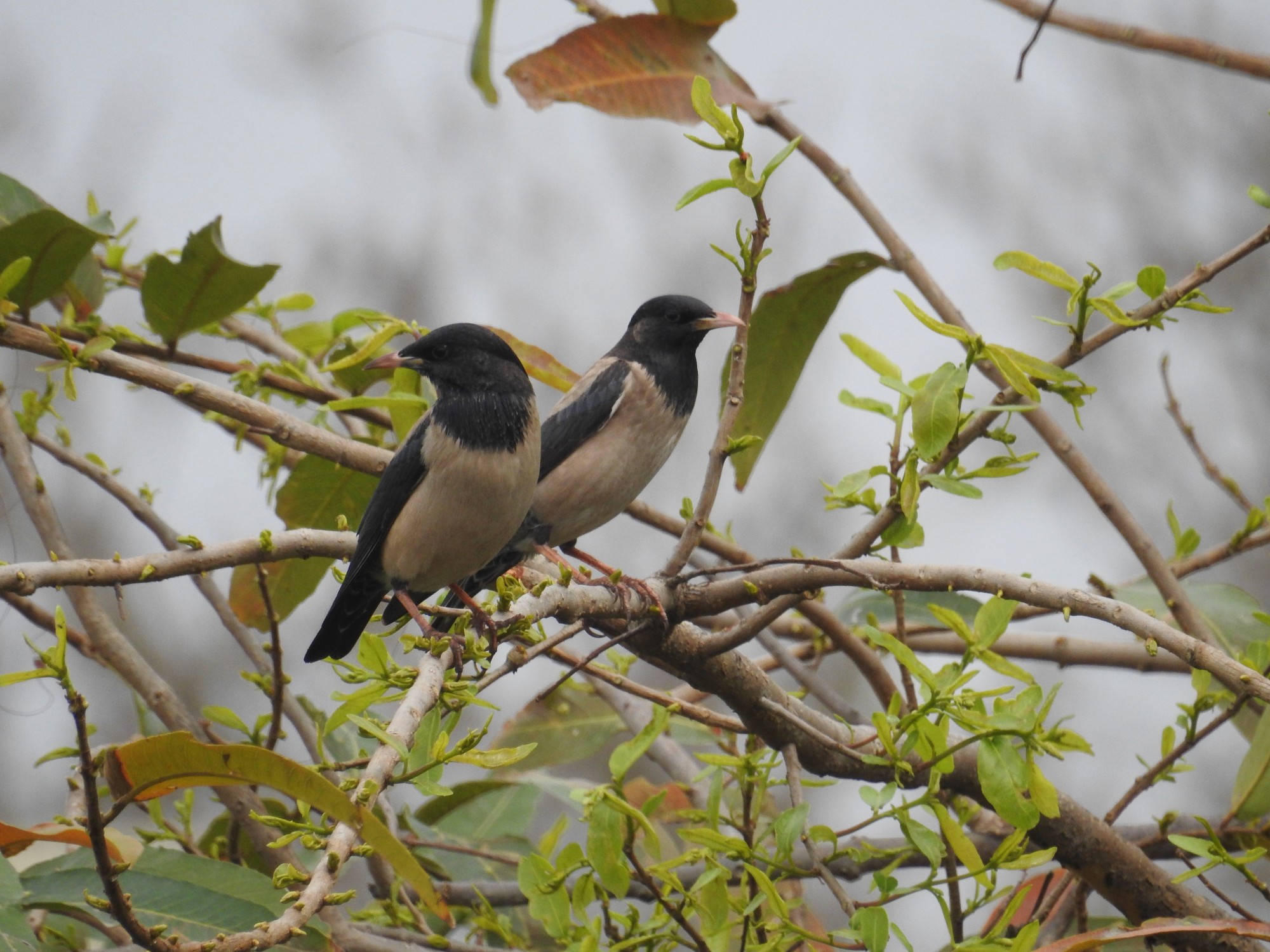 The branches of the tree were shaking, as if in merriment. A chattering sound emerged, joyous, excited, carefree. It was almost like the branches shook from the weight of laughter. Before I could see them, I knew what the source of the chatter was.

Rosy Starlings, here in India from Central Asia and Europe.

Like many other birds that come to India in winter — some leaving at the onset of summer and others staying on for longer — Rosy Starlings connect our country to other spots on earth. These birds, cousins of the Myna, make astonishing murmurations in the sky, floating pieces of perfect aerial choreography. The wings of the starling have beaten perhaps over a Kyrgyz sky, their song echoing over hills and steppes and the rugged Central Asian landscape before they land on a peepal tree in Bangalore or a semal tree in Delhi’s Vasant Kunj.

We often talk of combined heritage and a common purpose for humanity — living meaningful lives, sharing and saving the planet for the next generation. But what physically and naturally connects us? It’s not airports and airplanes. It’s the paths forged by wildlife, in the seas, the skies and our nations. By coming to a neighbourhood park in Delhi from Eurasia, the Rosy Starlings are reminding us that they need to migrate to survive — and that the Earth is not a static collection of maps, but a living, moving, shifting ecosphere.

Rosy Starlings are reminding us that they need to migrate to survive — and that the Earth is not a static collection of maps, but a living, moving, shifting ecosphere.

Within this ecological understanding, each biodiverse wetland and wilderness becomes important. It becomes, truly international. For example, Basai wetland near Gurugram dismissed as a sewage pond by authorities, is more than dirty water. It is a habitat for over 300 species. On the surface of the earth, it counts a great deal, more than our myopia can see. It counts for the Bar-headed Geese that come to Delhi NCR from the wetlands of Tibet. Other little-known wetlands too, are important for birds after the long, exhausting, international journeys they make. For instance, satellite-tags on Bar-headed geese revealed they migrate from the lesser-known Sur Sarovar bird sanctuary in Agra to Tibet, crossing the Himalayas (see page 131 in the hyperlink).

Basai wetland near Gurugram dismissed as a sewage pond by authorities, is more than dirty water

This Earth Day, I want to draw attention to migrations and movement — both long and short, epic and local, because this is the best way to remember our Earth is shared with other creatures. Like the Rosy Starling, India gets many amazing migrations, many of which have only recently been understood.

A clutch of satellite-tracking studies have fitted satellite tags on birds. Even a small bird like the Amur Falcon makes an incredible, awe-inspiring and tireless migration — from Siberia to Nagaland to Southern Africa, and then back to Siberia. From Desert eagles to Amur Falcons to European Rollers, thanks to several scientific collaborations, a world of live migratory maps belonging to many species are now available to be seen. Science and research is giving us a birds-eye view of these living flyways and migratory routes. We are faced with a global wildlife population decline and local extinctions — the new WWF living planet report finds 60 percent of mammal, reptile and amphibian, bird and fish populations have declined in the last 40 years. In this scenario, these routes are nerve-endings that require saving for a healthy planet.

Tigers migrate and move to find new territories, new mates and new habitat. Recently, wildlifers rejoiced as a tiger was photographed in Gujarat. Gujarat is famous for its Asiatic lions, but tigers? Historically, there were tigers in Gujarat’s Dang area, says wildlife expert MK Ranjitsinh. If Gujarat can sustain tigers, it would be the only political unit in India to hold wild lions, tigers and leopards in the modern day, he told me. Sadly though, the tiger died in a suspected starvation case. The thin forest cover the animal used may have provided cover, but not prey. Genetic studies have shown that tigers use corridors to disperse, and they need to disperse for their genetic fitness. In short, if we want a stable tiger population, we need to restore corridors, and actively maintain connectivity for local and inter-state tiger movements.

If Gujarat can sustain tigers, it would be the only political unit in India to hold wild lions, tigers and leopards in the modern day. But, in absence of prey, the tiger died.

It is ironic that science stresses these important findings and practice disposes of them — new projects like highways (an example is the expanded National Highway 7 between Kanha and Pench tiger reserves) and waterways (the proposed Ken-Betwa river interlink will drown 100 sq km of Panna tiger reserve) are further cutting up connectivity and causing the death of wildlife.

Back to the Rosy Starlings.

Soon they will leave India, and their chittering will no longer fill the boughs of large neighbourhood trees. As I watch them leave, my question always is: will they return? Will they return to Delhi, and to my neighbourhood? For the brief few weeks that they are here, I feel connected to an international phenomenon. Their flyway connects countries and a human to a Central Asian bird.

As I watch the Rosy Starlings leave, my question always is: will they return? Will they return to Delhi, and to my neighbourhood?

Let’s remember that on Earth Day and every day.

This first appeared in Tech2.

All photos by me.