The puppy pressed himself against the wall, whining like he was the most miserable dog on earth. A truck passed, sending shivers of fear down the tiny but expressive body. At that moment, I knew I would take the dog home.

At that moment, I knew I would take the dog home.

I also knew what was to follow—a wonderful life together, a meaningful and living bond between pet parent and pet, a friendship different from all others, and then a death that would come all too soon. Loving a pet is a love story in compact. It’s an entire universe of shared walks, silences, embraces, exhilarations and ailments being forcibly compacted into a tiny case. It seems ironic that the pure, uncorrupted love that we feel for our pets passes in an ecstatic rush of joy, a quickening of the senses, only to prepare for a too-certain cleaving away. Our pets hardly ever outlive us—Lagerfield’s cat, now one of the heirs to his fortune, is an exception only because Lagerfield was 85 years old. The bond with a pet is by nature intense and quickly realised; it is fighting, love and resolution on steroids; so different from the slow-burning, gradual and bumpy ties we have with other members of the family.

The bond with a pet is by nature intense and quickly realised; it is fighting, love and resolution on steroids; so different from the slow-burning, gradual and bumpy ties we have with other members of the family.

“But why do animals have to die so soon?” is also the core question in the remake of Stephen King’s The Pet Sematary. A beloved cat dies (unfairly). This question is thrown open to the universe, and this sets in motion a chain of preternatural events. Monsters and spells notwithstanding, the moot question itself remains basic and earthly—how do we deal with death? And how do we deal with deaths that are foretold, and come too soon—like those of our pets? The book, on which the movies are based, unsurprisingly, come from Stephen King’s own experience of his daughter’s cat being run over.

The remake of this movie, which throbs with menace, addresses how we should, or ultimately can, face death. It also addresses the question of guilt, and how guilt can be a driver of actions. Though the remake does not dethrone the first movie made in 1989, it is a lingering mediation on grief and mourning.

To me, the question of mourning is an inescapable one. There can be no living without mourning; no happiness without sorrow. Some fine movies too have thought about this issue: like ‘Pet Sematary’, the horror movie ‘Babadook’ is a tome on grief, and how personal monsters manifest themselves. The Kristen Stewart starrer ‘Personal Shopper’ thinks about dealing with the death of someone so close, it feels like one has died in the other’s place. The question is problematized even more when we are mourning the death of a non-human. As an exception, the movie ‘Marley and Me’ is about a dog (its coming into, and passing from, human life) more than the humans themselves.

To me, the question of mourning is an inescapable one. There can be no living without mourning; no happiness without sorrow.

The strange thing about losing pets is that people will tell you that you can get another. It’s not close to what you hear when you lose a person or family member. The other thing is that pet disposal is so patchy in the country that there is no real sense of closure. In land-starved cities, real pet cemeteries are few and far between. Not everyone has gardens to bury their pets. Some people have to resort to giving away a pet’s body in municipal waste. Society may not understand the grief of losing a pet, and the pre-emptive feeling of loss that is always at the back of one’s mind with getting a family member one will inevitably say goodbye to before many others. In that sense, the death-to-come is lived many times over. Thus at least when the death comes, it should have more ceremony and dignity. In municipal plans for all cities, there ought to be dedicated ghats and crematoriums to burn and bury pets. 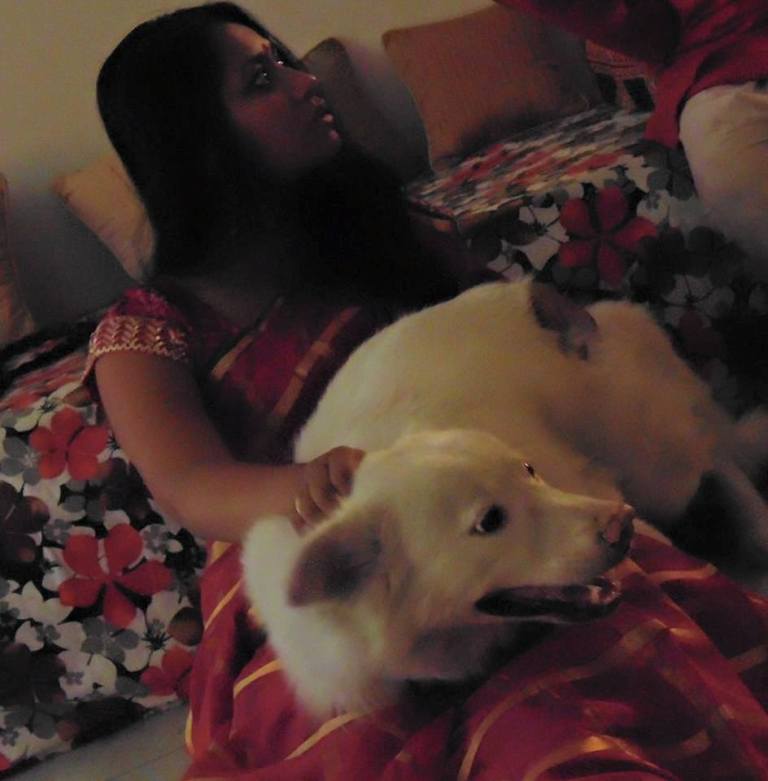 So that’s the point then: we need to look at life as a cycle of both death and birth, I thought. Something dies, something else is born. Life does always–cruelly and miraculously– go on.  But like hearing a new puppy can replace the one I lost recently–the shivering little thing I gave my heart to–I know there is no substitute.

There is no good formula to deal with grief. There is no logic and rationality, nor mystical mantra, that one can use. And that is why grief, not monsters, is the ultimate horror.

And that is why grief, not monsters, is the ultimate horror.

2 thoughts on “The Death of a Pet”